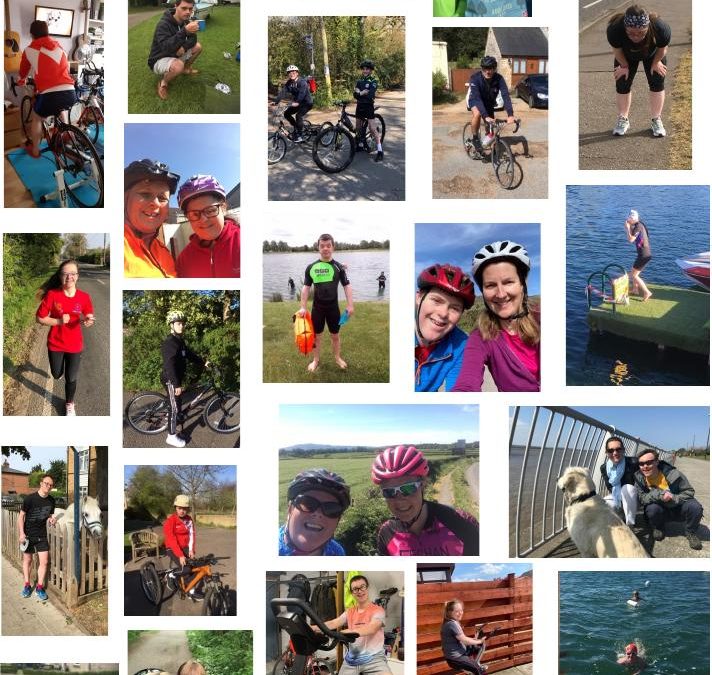 The DSS GB swimmers, their families and the coaches have walked, run, cycled, rowed, open water swum
and sailed over 25,000km as part of their fitness training during the first 100 days of lockdown.
I am sure a couple of glasses of that special water they have up in Scotland were involved, when Karen
(Cerys’ mum) had a brilliant idea 3 weeks into the lockdown. Since the DSS GB team were not able to
take part that month in the DSISO World Championships in Antalya Turkey, they as a family were going
“to get” from Ayr Scotland to Antalya by October when the competition was hopefully going to be
rescheduled. They were going cycle/run/walk the 3361.92km!

Having posted this on the WhatsApp group chat everyone wanted to join in using their training distances
to contribute. In an amazing 8 days we had already arrived at Antalya. Ok let’s go home but via Sardinia
and Paris, which were the venues for the previous European Championships—5457.4km. That took 13
days. We were all still in the middle of lockdown with no end in sight. The next challenge was Ayr to
Mealhada Portugal, where the 2021 European Championships are going to be held and back to Ayr —
5315.34km. This was achieved in 16 days.

Now for the biggest challenge; Ayr to Ireland, then on to New York City and finally to Novia Scotia Canada
where the World Championships were held in 2018 and all the way back home to Ayr a total of
11,157.4km! This only took 43 days.

Karen and Terry undertook the logging of distances every day with Terry producing some lovely charts
plotted to look like the Scottish flag. I have just calculated that over the 79 days the team averaged
320.46km per day.

Each week the team “met” on a Friday evening via Zoom for quizzes, visualization competition
preparation, cookery, Zumba and fitness sessions to foster team spirit along with some motivational
messages from Team Captains Thomas and Flo. The highlight of these was having Hannah Miley and
Chris Cook, Olympic and Commonwealth swimmers, each attend a Zoom session to really inspire the
swimmers with their stories.

It has been a most incredible achievement by Team DSS GB and they are still going. Will we manage
around the world – 40,000km – another 14,683.42km before the pools open again?